“Why dream it, when you can live in it?” 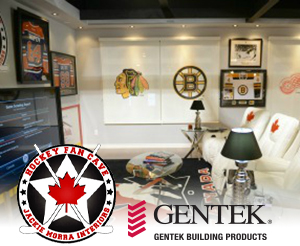 That’s the inspiring philosophy behind the creation of The Hockey Fan Cave, a hockey-themed space on display at the Winnipeg Home Expressions Home and Garden Show April 4 – 6, 2014 at the RBC Convention Centre Winnipeg.

The Hockey Fan Cave is the work of Jackie Morra, designer and principal of Jackie Morra Interiors for over 10 years. Jackie is a regular speaker at events like the National Home Show and is featured in various media such as Breakfast Television, Global TV- The Morning Show, Toronto Star, CTV, Toronto Sun, House and Home.com and Style at Home.com to name a few.

The inspiration for the Hockey Fan Cave came from the themed rooms Jackie and her husband Dan have created on a volunteer basis for children’s charities across Canada. 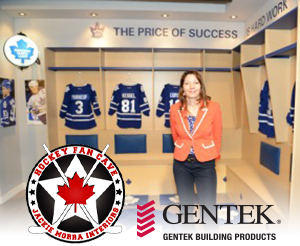 The second half of the space is 1000 sq. foot of Xtraice synthetic ice rink. Visitors are invited to skate on the synthetic ice rink, try their hand at bubble hockey games and view a state of the art 84” TV while lounging in home theatre seating.  Visitors can even have their picture taken with a replica Stanley Cup to commemorate the experience.

Jackie says there are many homeowners who want to decorate, update or renovate, but are not sure where to start. Projects like the Hockey Fan Cave are designed to offer inspiration, giving homeowners ideas for spaces that capture their unique desires.

“Finding something you love and building a space around it is an important element to creating an environment that inspires,” says Jackie, who is known for helping homeowners find their own personal styles.

Gentek is pleased to support Jackie’s work as a partner, because we believe our role is more than just to sell products. We want to inspire and educate homeowners to make their spaces as comfortable, attractive and long-lasting as possible, using the finest quality building products.